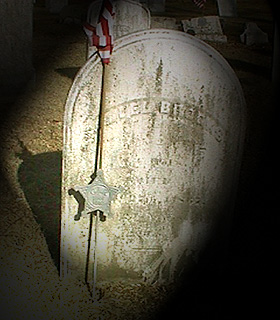 A Story of Spirit Assistance

I am a spirit medium; I hear voices of the dead, and sometimes see these people in spirit as well. I was at the old burial grounds, in rural New Jersey with my teenage son, taking pictures of some of the tombstones.

I noticed a tombstone of a young man who had died at 21 in 1869. I asked my son, "What exactly were the Civil War years anyway?", thinking the gravestone might have been that of a soldier. I couldn't remember the year the war started, and I thought it ended at 1865, but now I wasn't sure; we walked on. My son couldn't remember the exact years either, and went off to take some pictures of a nearby dilapidated barn.

I remained musing in the center of the cemetery. I heard a strong voice say "Samuel" in my left ear...I looked up and was drawn to a tombstone, about two rows of graves away, and was impressed to go nearer and read the inscription.

As I thought it would, upon close inspection, the name "Samuel" Brooks was engraved on the gravestone. An old grave marker with a metal star noted the Civil War years on it, 1861 to 1865...Samuel had told me what the years of the Civil War were. I was moved by this, and took a picture of his tombstone to remember the moment.

I came home and did a little research on Corporal Samuel Brooks; the only information I could find on him was on the Find-A-Grave site. Someone had been kind enough to add a little information about his grave to the site,but there was no photo of his grave. I added my photo of his tombstone to his information page, knowing that he appreciated this sign of respect.

Did you ever have the feeling you aren't alone, or that someone is watching you? I retired to my bedroom one night, to the feeling that I wasn't alone. The feeling was so strong that I decided to leave the TV on, hoping it would thwart my unseen visitor. I prefer daylight encounters when possible! After a few hours, my eyes were burning, and I had to shut off the TV. No sooner did I turn my back to the wall in the dark, when an unseen hand placed itself gently on my back. Oddly enough, it gave me a comforting feeling, and I immediately fell asleep.

About two weeks later, I lay down to go to sleep. I'd always had the 'knowing' that someone liked to stand in my bedroom doorway, peering in, so I wind up sleeping facing the wall...but this time for some reason I didn't. I was lying in bed, still awake, when a full bodied apparition was clearly visible in the dark room. He was there only for an instant...brown hair, short 1980s style ski sweater with red, white and blue snowflake type design, baggy jeans; a short man with a sad and uncertain look on his face. He appeared to be in his late 40s...but the memorable thing was that one shoulder was slightly down, and I knew he had pain in his legs, and had a limp. He vanished instantly, but left me with the impression that I should talk to a particular shopkeeper nearby, and she would identify him.

The next morning, I found the shopkeeper, who told me that this man was Mr..., a former landlord of my building. But, she said, I should really talk to so-and-so, who had lived in the neighborhood for years, and knew the landlord well. She would be the best one to consult. We were standing outside talking about this, when the woman the shopkeeper had just suggested I talk to, walked by! She identified him by his look, but especially by his limp. The old landlord continues to visit this building, just as he did in life. He has come and opened both my neighbor's and my door early in the morning (on the same morning!)

About three weeks afterwards, I was talking to the shopkeeper downstairs, when the smoke alarm in my reading parlor went off. I raced upstairs to find the room filled with smoke, but could find no cause for it. I checked everywhere, but there was no reason for it. And suddenly, the 'smoke' was gone...then I realized there had been no smell or burning of my eyes or lungs from it. Old Mr...was just checking the smoke alarm.

My young friend and kind neighbor Mathew and I went out to lunch at a restaurant in Lafayette, NJ. We sat down, and I began to get a bad feeling of anxiety in the pit of my stomach. I had a 'knowing' of violent history taking place in that spot, and was shown a vision of the presence of three Revolutionary war soldiers.

Our food was served by a sensitive waiter whose emotional state I began to have a connection with. I became more stressed and started to become anxious about the fact that the tea pot had no proper cover, and the tea cup didn't sit just right in the saucer…not at all like me. The anxiety stayed with me and grew, and I knew that there had been a much more recent death in that restaurant; I told Mat someone had died above us, upstairs. I ate, but it felt like it took me forever to eat my salad, and I didn't finish it.Now I'd been to this restaurant several times, but never experienced anything except a vague discomfort...I'd told Mat, who suggested the place, that I rarely thought of eating there.

I determined to ask the waiter what he knew about the history of the restaurant. He said that there had been many deaths there over the years, although the restaurant is not yet 30 years old. Then he told us that an old woman had sat with a much younger man in the very same booth that I and my much younger friend Mat were sitting in. The old woman began choking on a piece of prime rib, while her young companion blithely continued eating his meal. The staff hurriedly escorted the woman upstairs to try to help her. But she died nevertheless. Her young companion, even after learning of her death, finished his meal with gusto.

At the time the following experience occurred, I was living in a very old and haunted building, where many paranormal experiences took place. Mia, (my tiny 3lb. dog) began barking, waking me up one October night, somewhere around 3 am. She'd never done that before, and I'd had a premonition that someone might be breaking into my building, so I was frightened. I grabbed an old brass letter opener and got out of bed to check the apartment. I made it all the way to the kitchen before I found a reason for her barking. An old wall lamp I had hanging on a chimney that was no longer used was sitting on top of the refrigerator that was next to the chimney. The chimney just looked likepart of the wall that protruded out from the regular kitchen wall. The cord to the lamp was still in the electrical outlet. I mused as to how the lamp, which was much lower than the fridge, could swing up and over to the top of the refrigerator.  The screw that the lamp hung on was still on the wall, so I hung the lamp up again and went back to bed.

Next morning I was thinking about the lamp, and trying to figure out whether the incident was paranormal or just some freak thing that happened. I had just gotten a new 'ghost app' for my iphone, and thought it'd be interested to see if it said anything about this. So I went up to the chimney, stood in front of the lamp, and turned on the ghost app. Nearly faster than my eyes and brain could register, the lamp moved off the wall, up in the air, and on top of the fridge--all while I was watching, stunned. I remember mumbling something like, "well okay then." And even more weirdly, my ghost app said "lamp", "chimney", and "haunted". 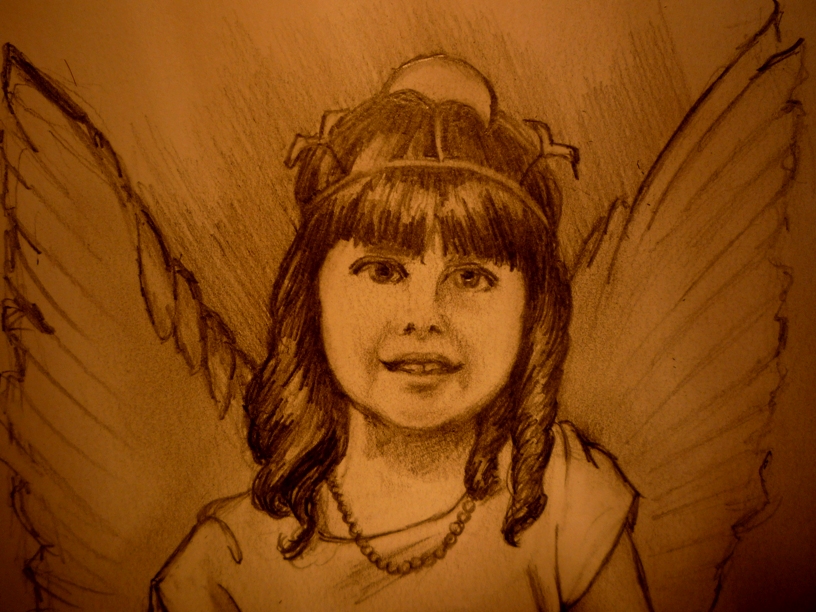 "In Memory of Gracie"
pencil sketch by June Ann
June's intuitive skills were inherited from generations of female family members. Gracie, the child angel in the drawing, was June's mother. Gracie died at the age of 34, when June was 7 years old.
DISCLAIMER: June Ann's services are for entertainment purposes only. All users must be 18 years of age or older.

Get listed in a premium web site directory for free where you can find more resources about Psychic Directory
http://www.the-online-psychic-directory.com
Online Dating Service - SocialGrid transforms the Internet into a free online dating service and social networking community.
Visit BodyMindSpiritDIRECTORY.org

PSYCHICS & MEDIUMS NETWORK The place where mediums and psychics meet to chat and train. Home pages of the UK mediums Craig and Jane Hamilton-Parker. The site has a massive paranormal resource with lots of real life stories and one of the busiest free psychic chatrooms on the web.